Rendering Blender scenes in the cloud with AWS Lambda

You can fairly easily leverage AWS Lambda to render scenes with Blender. It can make sense to use Lambda functions if you need to render a large number of assets in little time and if each asset is simple enough to be loaded and rendered in reasonable time (within the maximum lifetime of a Lambda) given the limited resources offered by Lambda functions (maximum 6 vCPUs and 10GB of RAM at the time of writing). If you have to render more complex assets, going with EC2 instances or AWS Thinkbox Deadline is a better solution.

When I came up with the idea of running Blender on Lambda, I naturally checked if someone was doing it somewhere and found out that @awsgeek had done something similar in 2019 so at least I knew it was possible. What we are going to present in this article slightly differs from his approach though.

Here is the very simple architecture that allows you to render Blender scenes on AWS Lambda stored on an S3 Bucket. The final renders are stored into the same bucket. 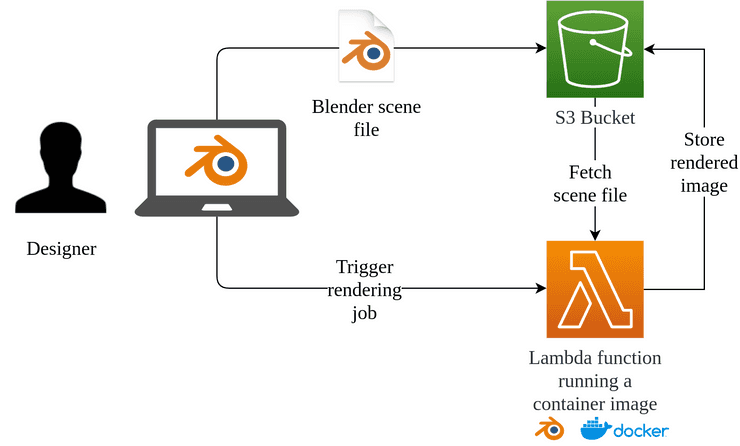 To run this on your own AWS account, you will need four files:

Here is how these files should be arranged:

For the Dockerfile, I started from a great set of Docker images for Blender maintained by the R&D team of the New York Times. We're using the latest image that runs Blender rendering with CPU only (as Lambdas don't have GPU capabilities unfortunately).

The serverless.yml file is fairly simple:

In this example, I am using the largest available Lambda functions with 10GB or RAM and 6 vCPUs so that the rendering goes as fast as possible.

The app.py file contains the logic that will be triggered by the Lambda infrastructure and it will receive the event passed as a trigger. In this case, the event must contain the width and height of the image to be rendered.

And finally, here is the python script that will be executed from inside Blender to do the actual rendering.

In the us-east-1 region of AWS, the largest available lambda will cost you $0.01 per minute. The request charge (the amount charged for every invocation) is probably negligible in comparison. Also, bear in mind that the generous free tier of Lambda might cover your costs! Same for S3.

I hope this can help anyone facing the same need that I did.

If there are other topics you'd be interested in, let me know on Twitter! My DMs are open.