Some third-parties only allow you to call their APIs if you are inside their network. This can make life difficult if your application is hosted on AWS.

The solution is to create a site-to-site VPN connection between your AWS Virtual Private Cloud (VPC) and the third-party's corporate network.

There are two common ways to do that:

I will touch on AWS Managed VPNs and then go through the steps of manually setting up a software VPN.

AWS has a Managed VPN service in which you create a Virtual Private Gateway in your AWS VPC, set up a Customer Gateway (representing the third-party) and create a VPN connection between the two.

This is by far the easiest and most robust solution. However, it has one major limitiations that might make it unsuitable for your needs:

With AWS Managed VPNs, the VPN tunnel can only be initiated from the Customer Gateway, i.e. the third-party's side!

As a result of this, there are only two situations in which you can use the AWS Managed VPN service:

If requests are initiated from your AWS servers to the third-party, and the third-party is unable or unwilling to take responsibility for keeping the tunnel open, then AWS-managed VPNs will not work and you will need to use an alternative solution.

How to set up a software VPN on AWS using Openswan

The rest of this article will walk you through setting up a site-to-site VPN connection using the Openswan software VPN.

At a high level, there are three steps: 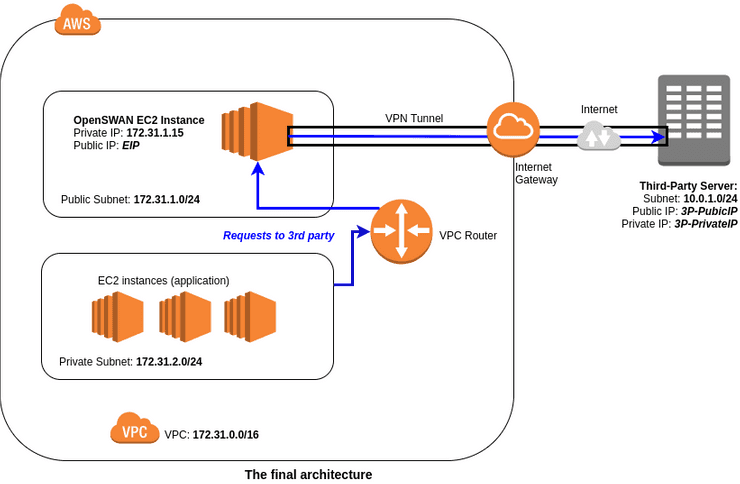 We are done with the AWS console for now. The next step is to log into the instance and set up Openswan itself.

If everything went well, you should now have a working connection.

We will test the connection in this order:

You can check the status of the VPN tunnel using

If the tunnel is up, you should see a line beginning with the name of your connection ("third-party" in our case) that contains the following statement near the end of the output:

If you don't see this, the output should tell you how far into process it got and at what point the tunnel failed to build.

To get a few more logs, you can also try

Make sure the security protocols and the PSK match what the 3rd party has.

If the tunnel does not even begin the build process, you might be blocking traffic to/from the third party for you public subnets.

2. Test connectivity from the Openswan instance

Once the tunnel is established, you can start testing the connection between your VPN instance and the 3rd-party.

Ideally, you should attempt to make an HTTP or HTTPS request directly to the third-party API (e.g. using the curl command).

You can also try to ping a host in the 3rd-party network (for this, you need to allow TCP traffic in the instance's security group).

If you get a response, congrats! If not, try the following:

3. Test the connection from your web servers

Once you have connectivity between your Openswan instance and the 3rd party, you can finally test the connection from your web servers.

SSH into one of your web servers and try to make a request to the third-party API.

If you get a response, well done, you have come a long way! You should verify that you can actually connect to the 3rd party from all of your web servers. If you are running a massive fleet, at least check that the connection works from each subnet.

For those less fortunate of you, repeat the debug steps above. In addition to that, you can also try the following:

Hopefully you should have a working VPN connection now. However, our VPN configuration still has a lot of room for improvement. The most urgent concern is that we have not set up any monitoring or automatic fall-backs for the VPN tunnel.

To do so, you would need to create and configure a second VPN instance. Next, you could then setup a monitoring script on a separate instance that checks the state of each VPN tunnel. If tunnel A goes down, the script should immediately adjust your route tables to reroute traffic through tunnel B while also trying to fix the tunnel A.

If you want to go down that rabbit-hole, I suggest you start with Appendix A of the AWS VPC connectivity options whitepaper.