A new major version is always exciting: when it comes to one of our favorite frameworks like Symfony, it’s Christmas come early for developers. But is is also worrisome. Will my application break? Will I have to rewrite half of my code? Don’t panic! We will go through the 3.0 major version changes and cover various subjects from new features to upgrading.

To be honest, there is no new shiny feature in this version. What? You said Symfony 3.0 was awesome! Yeah, Symfony 3.0 is awesome exactly because of that.

Let’s go back to one rule of semantic versioning:

Major version X (X.y.z | X > 0) MUST be incremented if any backwards incompatible changes are introduced.

As a consequence, Symfony 3.0 is allowed to break compatibility. It does little else. And this is necessary: at some point, you need to clean the compatibility layers burdening your framework. But to avoid most of the pain, the Symfony developers used a well designed release schedule:

If you are interested in shiny features and have not moved to 2.7 yet, you might want to read this:

The framework has become more standard (support of the PSR-3 standard for logging), has got rid of some architecture mistakes and is more decoupled and reusable than ever. Here are the notable changes:

Basically, the entire structure of Symfony didn’t change but there were some tweaks:

As a result, you can run PHPUnit without specifying a config file: phpunit instead of phunit -c app. All binaries are moved into the bin directory and the new var directory was made for easier permission settings (the entire directory should be writable).

The Asset component was introduced in 2.7 and automatically manages URL generation and versioning of your stylesheets, javascript files and images.

The LDAP component was introduced in 2.8 and allows you to use an LDAP service as a security provider.

A PHPUnit bridge was added in 2.7. Its main advantage is that use of depreciated code is reported and tests will fail because of that. With this bridge it will be easier for you to stay up to date.

The Twig and Translation profilers were added. Furthermore, the whole debug interface was redesigned to have a nicer look and a better user experience. 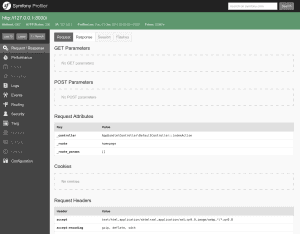 First of all, PHP 5.5 is the new required version to run Symfony 3.0. Check that your servers are running 5.5 or newer PHP versions, if not consider upgrading PHP.

As for the code itself, this is the easiest part. And you should do it even if you don’t meet the above requirements because 2.7 and 2.8 came with great performance and security improvements. Updating to a new LTS (Long Term Support) version when it comes out (2.8) is also a good practice for maintainability.

A method that should work in most cases:

Concerning PHP7 (this is a great month for PHP lovers), Symfony will not move to this version yet, but a bump to PHP 5.6 next year is being considered.

As 3.0 is not that a revolution (but a needed cleaning process), development will continue normally in the next months to come.

Even if you don’t upgrade now (but you really should), you can move to 2.8 which is an LTS and have warnings about deprecated methods that are removed from the 3.0 version. Migration from Symfony 1 to Symfony 2 was (and still is) a terrifying journey. With the Backwards Compatibility Promise, the Symfony development team wanted to build a more lasting framework and produced a nice and smooth migration process for 3.0.