A long-lived and easily programmable smartwatch 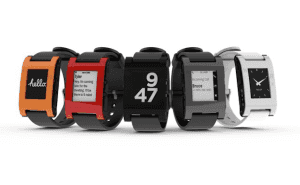 I went to a Pebble meetup at Ecole 42, and since I'm really into connected objects, I discovered there some awesome things that you can do with the Pebble watch that I would like to share with my fellow Connected Objects enthusiasts. Firstly I would like to share some of the greatest moments of the talks of Thomas Sarlandie (@sarfata) Developer Evangelist at Pebble and of the lightning talks (lasting from 5 to 10 minutes) that followed, then what I like most about the Pebble.

Thomas first described what Pebble is: it's a smartwatch quite unlike the others since it has no touch screen, instead it has 4 buttons. Why is that? It allows Pebble to have a much longer battery life: from 4 to 7 days.

He then delved into Pebble's features. Pebble is equipped with an accelerometer, a compass and an ambient light sensor and you can connect it to your smartphone by bluetooth 4.0. Some things to note: Pebble has 128kB of RAM so if you decide to jump in and develop your own pebble app, you might have to optimize your code in order to have it run smoothly.

There are two kinds of apps that you can install on Pebble: watchfaces which allow you to customize the display of the hour (by adding weather or activity information) and apps which allow you to do various kinds of things among which: take a picture, change the music on your phone or check your gps navigation, but I'll come back to that later. One other piece of information to note: you can only have at most 8 apps or watchfaces loaded on the watch at any given time.

So, how do I make my own app? There are several ways to do that, depending on the app you want to make:

Pebble C: Apps running on Pebble are written in C, so if you want to make an app that needs no communication with your phone (such as a watch face or Tiny bird) or if you want to build an optimal app, you can use the Pebble C SDK.

PebbleKit: If you already have a mobile app that you want to use on your Pebble, then PebbleKit is for you: it allows you to push notifications on the Pebble and exchange data with an app running on the Pebble.

PebbleKit JS: If you want to build an app on the Pebble and use the features of the phone (without having to launch an app on your phone), then PebbleKit JS is the solution. Build your app using the C SDK and run JavaScript on you phone, thus your app can access the internet, the phone's GPS, persist data on the phone and so on...

But if you are allergic to C, then you may want to check out Pebble.js. It lets you run JavaScript applications on your phone which can access all the resources of the phone as well as communicate with the Pebble. However, as they run only on the phone, the required Bluetooth protocol uses more power and makes the app slower than a native app.

One last thing to mention about building Pebble apps: Pebble has made a free cloud platform: CloudPebble which allows you to easily make new apps by using existing templates as well as compile your app. All these features add up to make a really user-friendly development environment!

Thomas' talk was followed by four lightning talks which I will describe in a few words:

In the first talk, Thê-Minh TRINH and Antoine Kuhn from Applidium presented their app which allows you to see your public transportation itinerary and go through the connections you have to make. This allows you to see exactly where you have to go without having to find your phone lost in the depths of your pocket. (This app is not available yet).

The second described app allows you to see a black and white version of what the phone's camera is sensing and take pictures.

Then we were introduced to the Connected Challenge, an online hackathon dedicated to Connected objects in which start-ups and big companies have made their APIs available.

Finally, a really interesting talk about what you can do when you combine Pebble with Tasker("Tasker is an application for Android which performs tasks (sets of actions) based on contexts (application, time, date, location, event, gesture) in user-defined profiles or in clickable or timer home screen widgets.") such as have your public transportation notifications transferred to Pebble only when you are at home and it is earlier than 8am or at the office and later than 6pm.

So it's been a week since I got my own Pebble and I have found some of its features quite enjoyable such as getting e-mail, agenda and SMS notifications, controlling the music without having to take my phone out of my pocket and having the GPS navigation (with Nav me) on your watch really comes in handy when you're riding your bicycle and like me you have no sense of direction ☺.

I don't find the lack of touchscreen detrimental as I don't expect my watch to replace my phone and the existing 4 buttons are sufficient for most tasks and this allows the watch to have a way longer battery life, which is nice.

As you may have noticed, I am quite thrilled by my new watch, despite its limitations and I will definitely dive into the possibilities of combining it with Tasker. The meetup was really informative and interesting for Pebble beginners such as myself and more advanced Pebble users can discover use cases they might not have thought of so do not hesitate to come and join us and spend some enjoyable time ☺.