The ICT sectors carbon footprint represents now around 4% of the global CO2 emissions. To minimize that, one of our goals at Theodo is to design sustainable web applications with minimal carbon footprint. And in order to know how performant we are at this, we need to be able to evaluate the power consumption of our applications and more specifically the power consumption of the VMs we use in the cloud. Unfortunately, at the moment no cloud provider is able to provide such a data. So we had to look for a solution.

Our research led us to PowerApi, an open-source project developed by the Spirals research group from University of Lille 1 and Inria in France. It allows people to estimate the CPU’s power consumption induced by an application without any external device like a wattmeter. As we can't put wattmeters to measure the VMs consumption in the cloud, this looks like a good option.

From the documentation, we can read that PowerApi collects with a sensor raw data from the hardware of the server. Then PowerApi applies a “formula” and voilà: we have the power consumption of the monitored software stored in a database. 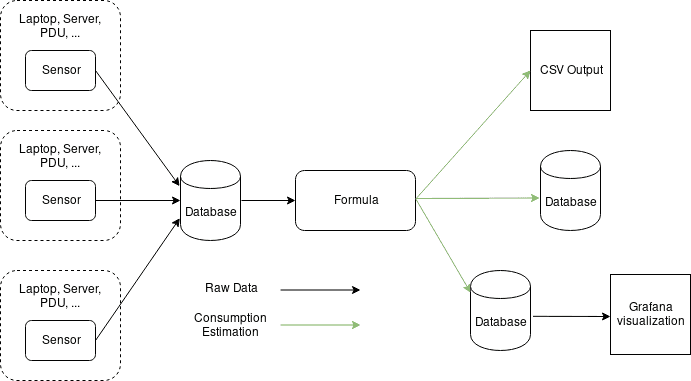 After reading this I asked myself two questions : what is this “raw data” and how did they build this magic formula ? Fortunately, we can all have access to their research papers where they explain everything. So let’s dig a bit deeper.

A Power Model is used to approximate the power consumption

The formula is what is called a Power Model in the academic field. A power model is a model that approximates the power consumption of a hardware based on different factors.

I knew that each CPU has a specific TDP on their specification page: “Thermal Design Power (TDP) represents the average power, in watts, the processor dissipates when operating at Base Frequency with all cores active under an Intel-defined, high-complexity workload”

So when I pictured the formula, I thought it was going to be quite simple and something like:

Reading their research paper, it turns out it’s more complicated: “the CPU load does not accurately reflect the diversity of the CPU activities. In particular, to faithfully capture the power model of a CPU, the types of tasks that are executed by the CPU have to be clearly identified.”

The types of tasks in a CPU are also known as events. Each processor type has hundreds of different events with potentially a different power consumption. To have an acute idea of what the CPU is doing and thus knowing the related power consumption, the PowerApi teams decided to rely on those events and count them.

To ensure that the data is not biased to one kind of CPU activity, the team used an academic set of different workloads called PARSEC.

“To explore the diversity of activities of a CPU, we consider a set of representative benchmark applications covering the features provided by a CPU. In particular, to promote the reproducibility of our results, we favor freely available and widely used benchmark suites, such as PARSEC.”

Step 2: get the correlation between real power consumption and HPC events 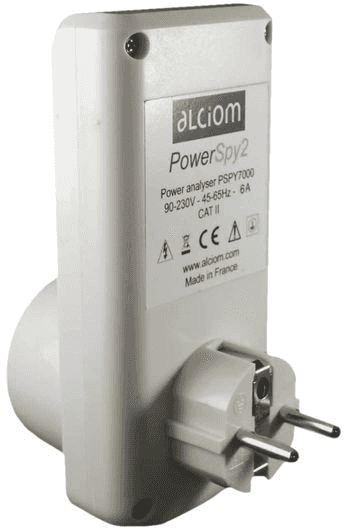 Real time in the context of this experiment is that every 250 ms:

By doing so we obtain a lot of data linking power consumption and HPC events.

Step 3: select the HPC events that are the most correlated to power consumption

The two final steps are a mathematical ones. Step 3 is about removing the HPC events that are weakly correlated with power consumption to simplify the step 4.

At this step, the team uses an advanced mathematical method of regression (ridge regression), to get the 2 or 3 HPC events that will be able to predict the power consumption of the software on the machine. This is what we call the Power Model

Here is a diagram of the whole phase: 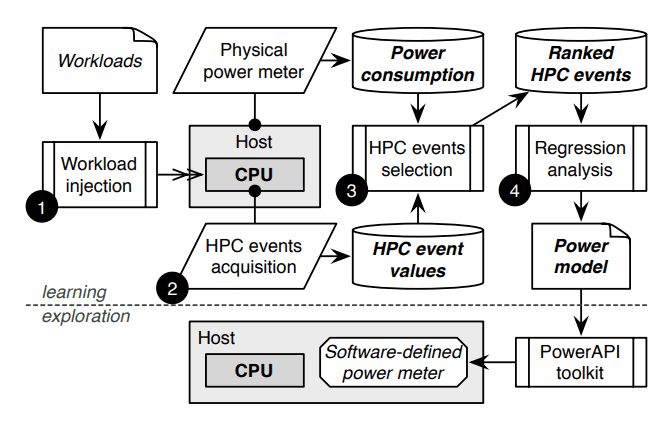 As the Power Spy 2 measures the power consumption of the whole server, all other hardware components (memory, disks, motherboard and fans, ..) are integrated into the power model. It works well because the CPU is the most energy consumming component.

For example, one power model for the Intel Xeon W3520 is

To get a real time power consumption of this server PowerApi has then just to count those events.

As Cyrielle has explained in this blog post, we were able to measure the power consumption on our local machine. But we couldn't use it to calculate power consumption on AWS servers which was our original goal. Indeed the research team can't do the learning phase on the AWS servers (yet?) as they don't have access to it. So the PowerAPI software can't get the data needed for its Power Model.

Thanks to this project and the things we read to try it, we learnt a lot:

The next idea that looks promising to have a rough idea of the power consumption of our application is the "Cloud Jewels" approach by Etsy adapted for AWS.