Do not Forget to Cover your Import Scripts with Tests!

A major issue during my last project was regressions in production occurring twice a week. The PO felt anxious, and the project was in danger,
even though the team was reactive and able to quickly fix regressions.

Why so many regressions?

A good explanation could be the lack of tests. However, both Node.js/Express.js back-end and AngularJS front-end were 80% covered by unit/end-to-end tests. Tests are supposed to prevent regressions so what's wrong with them?

Something was clear: most regressions were related to the data.

In our app, people can have phone numbers on their profile page. The app receives on a daily basis a file containing people IDs and phone numbers. The team wrote a script loading phone numbers into the database every night.

A regression occurred on the second day: people have the same phone number twice on their profile pages :( This is typically a data issue:

The culprit was the import script that did not remove old phone numbers before loading the new ones. Neither back-end tests nor front-end tests could have spotted this issue. If we look at the data flow of the application: import scripts lack tests!

What do we need to test?

Data come from CSV files we received daily through a FTP. A Python script fetches the files and loads data in the database every night.

Files are encoded in various formats: UTF-8, ISO-8859-1, Windows-1252 and even EBCDIC!. Checking that scripts can properly read, decode and reincode these files is a first step.

The import scripts not only load data but also establish relations upon it. For instance, imagine the script loads two csv files respectively containing people names and phone numbers:

The import script is launched every day, hence all data is refreshed every day. Let say that the app received the following two files respectively on day 0 and day 1:

How do we write the test?

The directory structure of the test folder looks like this:

The test import-script-test.py is written in Python and consists in: 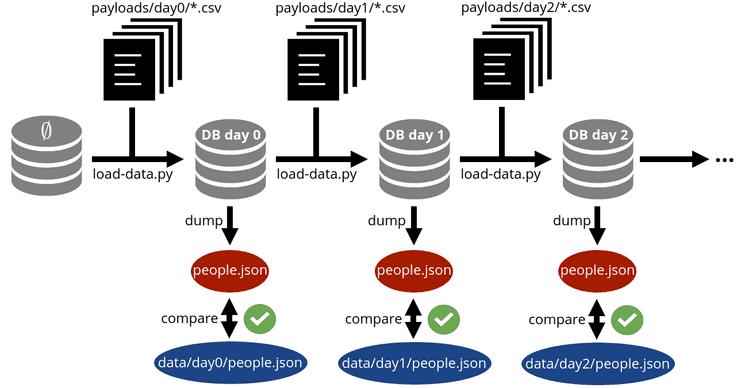 It is an end-to-end test for the import script that allows us to verify all the aforementioned points. Payload files are kept small so that the test can be easily updated. Running consecutive imports allows to check data resilience.

Testing the import scripts prevents many regressions due to data.

Not all projects need import scripts tests. You should evaluate the data flow of your app to decide whether it is worth it.